Carpe Diem Inc. will present Not Last Night…..but the night before!, the new comedy by George Hosker-Bouley will play at the West End Theater, 959 Islington St., Portsmouth from February 24 – March 12. Performances are Friday and Saturdays at 8pm and Sundays at 2pm. A special matinee performance has been added on Saturday, March 11 at 4pm. Tickets are $18 for students and seniors and $20 for adults. To reserve tickets please call (978) 683-7745

Not Last Night…..but the night before! follows the day to day troubles of Colin Ryerson as he attempts to write his first novel. Nagged by his wife and mother, Colin escapes into a fantasy world where he is the hero of his own novel set during the German occupation of France. The one problem is that Colin’s fictional characters start interfering with his real life. The show stars Katy Hunt, Meg Oolders, Anne Rehner, Carol Seely, Norm Smith, Ken Stiles and George Hosker-Bouley

The production is presented by Carpe Diem Inc., Hosker-Bouley’s company that has been producing award-winning original theater for more than 24 years as well as the ever-popular Portsmouth Underbelly Tour. As Artistic and Executive of the Prescott Park Arts festival for more than 13 seasons, Hosker- Bouley has always blended traditional stories with a wry sense of humor. This past year Hosker-Bouley has presented the standing room only The Desperate Hour as well as The Windsor Pearls, Where There’s A Will, The Gloucester House Boys” and A Night at the Museum – John Paul Jones and A Dickens of a Christmas. Hosker-Bouley is the Drama Director for York High School. 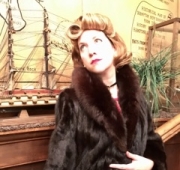